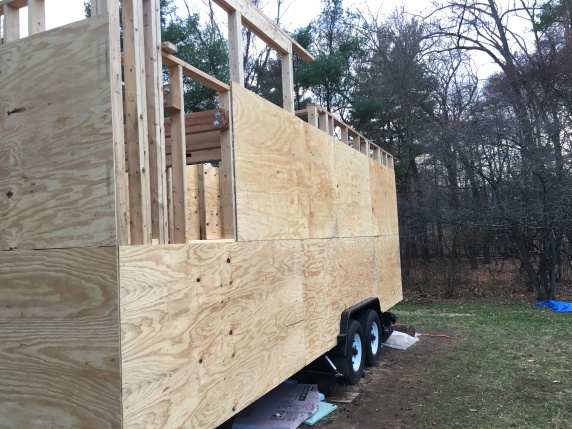 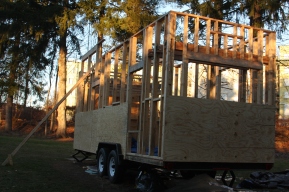 December is being kind to us, starting with a couple weeks of mild weather and letting us find our feet with the plywood sheathing for the tiny house.  Find our feet because Seth’s winter schedule is different from his summer schedule, so we don’t have a build day together that often.  Once every two weeks or so?  Three?  I couldn’t say.

When we are together (and migraine-free), we hang plywood.  It took two sheets for us to get a good process down with just two of us, but now we’re a little more than halfway done with the wall sheathing thanks to some time and generosity from friends.

I spent the afternoon yesterday making a template for the plywood to go over the wheel wells, and then cutting the plywood and hanging it.  And let me tell you something: plywood is heavy!  A day later and I’m still tired.  But the house looks nice, don’t you think? We are inching ever closer to getting things boxed in so we can put the roof rafters on.

We chose to sheathe the walls of the house first so that the plywood will sit up fully under the roof rafters.  The alternative was putting up the roof rafters first and then trying to fit the plywood underneath where the rafters hit the walls.  Both methods are valid but from what I understand, the way we’re doing it is easier.  Then again, I feel a little like Anne of Green Gables when she says, “Have you ever noticed one encouraging thing about me? I never make the same mistake twice.”

And then Marilla says, “I don’t know as that’s much benefit when you’re always making new ones.”

Time will tell if we’re making a mistake.  But the good news is that once we know about it, we won’t make it twice.