With the trailer finally ready to go, we placed an order for wood and insulation.

“Wait!” I can hear Seth saying, “it wasn’t that easy.”  Of course it wasn’t!  Because when you’re Christine, you have to research everything about everything, all of the time.  What can I say?  It’s what I do.

For insulation, we needed 2.5″ of rigid foam to fill the space within the trailer. Rigid foam is lightweight, it cuts easily, and the kind we picked doesn’t absorb water.  This is important because we want to discourage mold growth as much as possible, thanks to my health sensitivities.

We chose to go with 1″ of xps insulation, and 1.5″ of polyiso insulation.  In the best of all possible worlds, this will give us a floor with an r-value of 16.5 in our flooring. You see, xps works better in cold weather than hot, but polyiso is the opposite.  Polyiso works worse in cold weather because the gas that’s trapped in the air spaces in the foam condenses into a liquid in 20 degree or lower temperatures, negating the r-value. The trick to using polyiso is that it has to be insulated from cold air.  We accomplished this by placing the xps into the trailer first, then laying the polyiso on top of that.

The polyiso has reflective foil on both sides.  First, if you leave a small gap between in the insulation and subfloor, the foil will reflect heat from above back into the subfloor, and second, it will reflect cold from below back down toward the xps.  Hopefully, this will be enough to keep our r-value up and prevent cold feet in the winter. 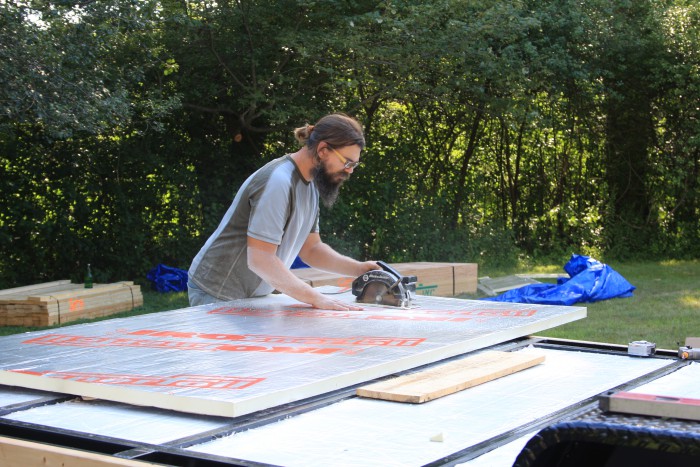 Your beard is looking pretty white there, Seth.

After cutting the insulation to size and fitting it into the bays between the trailer cross beams, we cleaned up so we could break out the plywood sub-floor.

Buying wood was another interesting process.  In the beginning, we had hoped to source our supplies from a local construction firm’s surplus, but the timing wasn’t right and that deal fell through. We ended up placing an order with one of the area lumber companies. But before we could buy anything, we had to do research. Research! Always research.

Plywood is made with by sandwiching glue between thin sheets of wood.  The glue used to make plywood is made with formaldehyde, which is one of those chemicals that off-gasses volatile organic compounds (VOCs) into the air.  In particular we’re talking about urea formaldehyde, which causes health problems in susceptible people. If you look up susceptible people in the dictionary, you are likely to find the picture of a certain tiny house builder named Christine.

You might have heard of formaldehyde VOCs being a problem in the last ten years or so since Hurricane Katrina hit.  The FEMA trailers the government distributed after Katrina were in the news for years because they were built with plywood made with urea formaldehyde, causing all sorts of health problems for the people who lived in them. This is something we decided to avoid, thanks very much, and so we searched for plywood made with urea formaldehyde-free glue. Although some companies had never heard of urea formaldehyde-free plywood, the problem wasn’t finding it so much as finding a lumber company that would sell us a small quantity of it. Over and over I heard that they could order me the plywood, but only if I bought a whole shipment at once.  They couldn’t sell it if they broke open the pallet to give me my few pieces.  It’s the difference between buying 50 sheets of plywood vs. 120.

It took a couple of weeks, but we found a company that was happy to sell us a small quantity of the plywood we want, and they delivered it to our site so that we can start right in on the subfloor.

Bonus proof that our life is a sitcom:

When the lumber company came to deliver our wood, they called to say they were 20 minutes away.  An hour later, they called back to say that they had gotten lost and dropped half our load of wood onto the street, but not to worry, they picked everything up and were on their way again.  And finally, when they unloaded the wood from the truck, they backed their forklift into our trailer and broke a taillight. Where’s the laugh track when you need it?