We took a weekend away from working on the house in July to meet up with some friends for vacation, and over the weekend it rained. This is not a vacation recap! It was nice seeing our people, but the point of this post is the tiny house. When we came back to the trailer, we realized part of the flashing had torn away.

You see, the rain over the weekend collected in the tarp over the trailer. The water in the tarp weighed down on the flashing, putting too much pressure on the screw points. And since the flashing is only thin pieces of aluminum, it couldn’t withstand the weight and pulled loose along one section. The aluminum was beyond repair and had to be replaced. If we had left the tarp off the trailer for the weekend, the water would have been able to leak out of the gaps in the flashing (which is the purpose of the gaps, by the way). We wouldn’t have had to replace the flashing on our return, only dried it off a little bit and dealt with some rust spots.  Hindsight is 20/20. 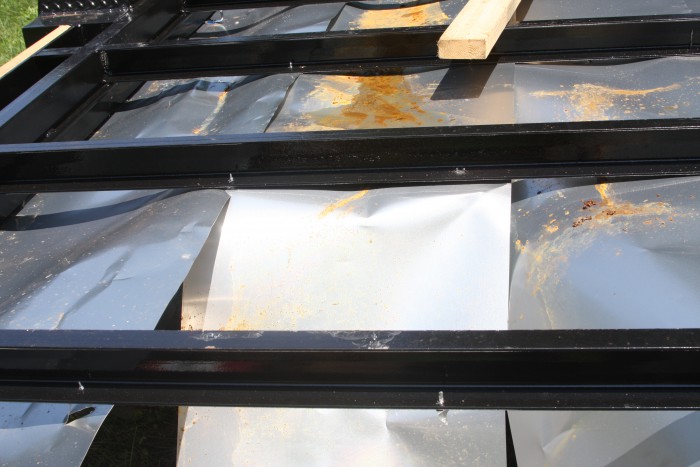 Thankfully, the picture looks a lot worse than the actual damage.  When all was said and done, a 4 foot piece of flashing had to be cut away and replaced, taking a little more than an hour to fix. 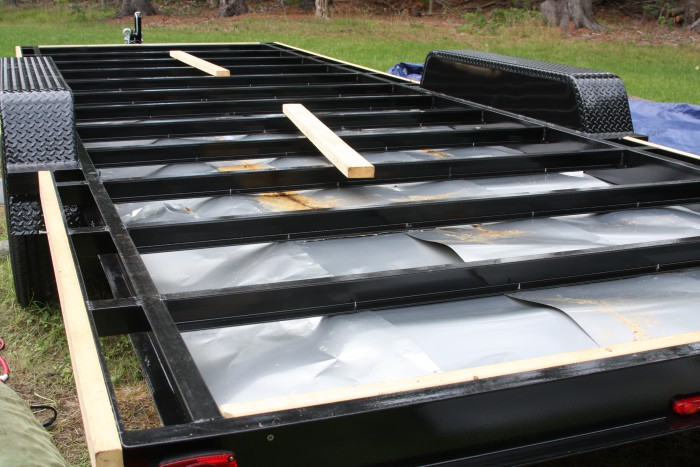 Once we made the repair, we decided to be more cautious with the flashing.  You can see that it sort of fish-mouths in places. It gapes, leaving openings where water can get in from splash-back as we drive. The reason it does this is because it’s difficult to pull the aluminum roll taut across the 24 foot length of the trailer, despite our efforts with friends and grip clamps.  Other tiny house builders make installing flashing look easy, but since Seth and I have the sneaking suspicion that we live in a sitcom, it came out lumpy for us. Of course it’s lumpy! It couldn’t be anything else.

There’s a fix for this as well.  Before laying the subfloor insulation into the trailer, we decided to tape the majority of the seams up with flashing tape. 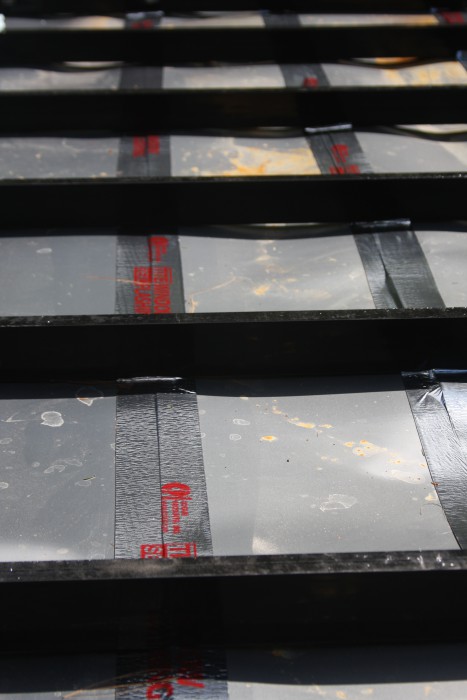 Flashing tape can be found in the roofing section of a home improvement store. It’s weatherproof tape that goes around a window or a door frame when you’re building.  One side is shiny so that if you tape something up and then leave it exposed to the weather before getting around to putting on the siding, you won’t ruin the weatherproofing of the tape.  Fancy, eh?

We taped up the seams between the cross beams of the trailer, leaving gaps where the water can still run out if it happens to collect, but making it much less likely for water to migrate in once we’re moving.  This was another fairly quick process, taking about two hours total.  Onwards and upwards!  Next comes the subfloor.